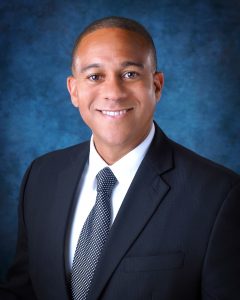 I am the Alpha Phi Alpha Western Region Tri-State District Director. I am responsible for Arizona, New Mexico, and Nevada. I am the director for ten chapters: five alumni and five college chapters. I am very passionate about Alpha Phi Alpha and have worked on a consistent basis to uphold the light. Along with my passion, I have developed valuable skill sets in leadership, organization, training, protocol and development of individuals in my fraternal and professional career.

My skill sets from a fraternal level include Chapter President for a combined total of six years (2004-2006 and 2012-2016), Chapter Vice President from 2002-2004, Area Director from 2007-2011, Western Region Security Director from 2015-2017, Logistics Committee for the 69 th Western Region Convention, Reno, NV Exploratory Committee, Chapter Parliamentarian from 2010-2012, former Chapter Advisor for Sigma Psi, President of the Theta Pi Lambda Foundation, Vice President of the Theta Pi Lambda Foundation, and Vice President for the Las Vegas NPHC from 2014-2016. I have been an IMDP Western Regional Trainer. I was part of the 96 th General Convention volunteer team in Indianapolis, IN.

I’ve also attended numerous district conferences, leadership conferences, regional conventions, and general conventions. By attending the aforementioned events I was able to stay current on the direction of our Fraternity and then take that information back to my local chapter. Additionally it gave me the opportunity to understand the flow of the agenda for each conference/convention and how important making sure all involved presenters are properly prepared to move the agenda forward.

In my professional career, I currently serve as a Patrol Lieutenant for the Henderson Police Department in Henderson, NV. I directly supervise two sergeants and 18 officers. Due to my seniority as a graveyard lieutenant, I have the responsibility of overseeing the City of Henderson’s law enforcement component of public safety. As a lieutenant I focus on administrative duties; use of force investigations to assure the officer performed their duties within the law, policy, and procedure; training on policy and procedures; reviewing reports; accounting for my employees worked hours; personal matters that arise and assuring they get the support they need to take care of themselves and family; and forming community partnerships to improve and maintain relationships in my community. Additionally, I’ve volunteered to be part of my department’s Diversity, Equity, and Inclusion committee. I was on the committee to develop our 2025 strategic plan for my department.

Finally, I have a Master of Science degree in Administration of Justice and Security from the University of Phoenix. The courses I took for my masters gave me a better understanding of command structure, risk analysis from a global perspective, and working through complex issues and developing solutions. I’ve applied what I learned in my courses to my fraternal and professional careers.

In conclusion, I have a passion for Alpha Phi Alpha and commitment to excellence for our Western Region. Additionally, my skill sets from my fraternal roles, professional work experiences and education, are applicable to my role as the Tri- State District Director for the Western Region. It’s an honor to serve in my current role and I look forward to working with the brothers of the Western Region.