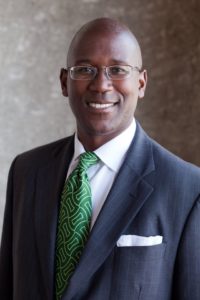 Brother Jackson was initiated into Alpha Phi Alpha Fraternity, Inc. on March 4, 1989 via the Iota Psi Chapter at Cal Poly Pomona. Brother Jackson received his Bachelor of Science Degree in Urban and Regional Planning from Cal Poly Pomona and his Masters in Public Administration from Baruch College in New York, where he was a National Urban Fellow.

A Southern California native, Brother Jackson has focused on real estate planning and development throughout his career. His 20 years in the industry bring experience in the areas of comprehensive urban planning, redevelopment as well as residential and commercial development.

Brother Jackson is currently the Senior Planner for the City of Inglewood overseeing transit oriented development station area planning, active transportation, and other forward-thinking planning programs and projects. Prior to joining the City of Inglewood, Brother Jackson served as the Los Angeles Office Operational Manager and Senior Project Manager for McKissack & McKissack. He has also served as Development Manager for the McGregor Company where he managed the completion of a $50 million redevelopment effort for the former Hanna Barbera Studio site. Brother Jackson served as Development Associate for Urban Partners and also served as Development Specialist and Urban Planner for the University of California, Merced where he was involved in the programming and planning for the campus’ first buildings. Additionally, Bro. Jackson is a former Commissioner on the South Los Angeles Area Planning Commission, active member of Zion Hill Baptist Church, and Treasurer of the Wellington Neighborhood Association, where Brother Jackson resides with his wife, Joanna and their two children, William and Jade. 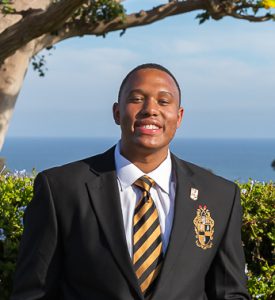 Bro. Eric Johnson-Greer is the 2019-2020 Assistant District Director of the Southern California District and Chapter President of the Upsilon Chi chapter seated at Pepperdine University.

Bro. Eric Johnson-Greer is a senior at Pepperdine University in Malibu, CA majoring in Physics and minoring in Chemistry. Bro. Johnson-Greer will graduate this Spring with the class of 2020. Following his undergraduate studies, he plans to attend a graduate program studying Energy Engineering to facilitate his ambition of going into the renewable energy field.

Originally from Northridge, CA, Bro. Jonson-Greer considers himself a son of Los Angeles, CA. Initiated into Alpha Phi Alpha Fraternity, Inc by way of the the Upsilon Chi chapter seated at Pepperdine University, he remains very involved on his university campus. He sings Bass and Baritone in the Pepperdine Pickups Men’s Acapella group, he is a mentor in the Black Student Association, and has membership in the Latino Student Association, Physics Club, and the Pepperdine Engineering Society. Bro. Johnson-Greer has also studied abroad in Buenos Aires, Argentina during the Spring of 2017. His collegiate experiences thus far have shaped him into the upstanding young man he is today and he is eager to grow even further during this, his final year at Pepperdine.