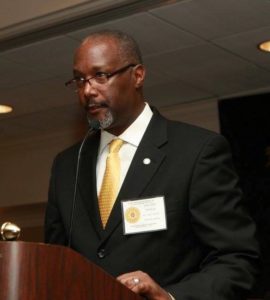 Brother Torrence was initiated into Alpha Phi Alpha Fraternity, Inc. in the fall of 2007 via the Zeta Beta Lambda Chapter of Sacramento California.

Born and raised in Southern California, Brother Torrence was awarded an athletic scholarship to attend San Jose State University where he was an NCAA All-American in Track & Field.  Bro. Torrence would later transfer to the University of San Francisco to obtain his Bachelors Degree in Information Systems Management and would later earn his Project Management Certification from Sacramento State University.

Brother Torrence started his career in Computer Science at Hewlett-Packard where he was employed for 19 years.  He later continued his career as IT Director for Thunder Valley Resort Casino in Northern California, and now works for the State Legislative Data Center. As a key contributor to the technical support infrastructure for the Legislative Data Center, Brother Torrence performs critical business analyses for system enhancements and conducts Oracle E-Business Suite support. Furthermore, he is a primary support resource for the California State Assembly Human Resource’s Payroll and Finance Departments.

Brother Virgil Torrence has been married to his wife Angle for 28 years and they have two adult children whom are the joy of their lives – Brianna & Nicholas Torrence.

Bro. Meshach McBorrough is the 2019-2020 Assistant District Director of the Northern California District and Chapter Vice President of the Alpha Epsilon chapter seated at the University of California at Berkeley.

Bro. McBorrough originally hails from Monrovia, Liberia.  He speaks three languages; (English, Bassa and Twi), is a past Bridge to Rwanda Scholar, a past Acts4Rwanda Counselor, a past 3 year English Instructor and past 5 year John F. Kennedy Medical Hospital Volunteer.

Bro. McBorrough is currently a senior double majoring in Public Health and Social Welfare. He serves as the President of the Organization of African Students and Vice President of the International Students Commissions at UC Berkeley.  Bro. McBorrough is highly interested in giving back to his home community and the world at large. Ultimately, he aspires to become a Pediatrician in the near future.